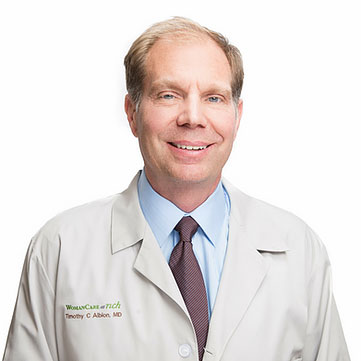 I am no longer seeing patients on a clinical basis. I have taken on a new administrative role within the practice. My role is to oversee the day to day flow of the Obstetrical aspect of the practice. I feel very blessed for the career I have had and to have been a part of your healthcare team.

Dr. Albion was born and raised in the northwest suburbs of Chicago. He attended the University of Illinois at Champaign, for undergraduate studies, and graduated from The Chicago Medical School. He completed his four-year residency in Obstetrics and Gynecology at Cook County Hospital, in Chicago, where he became Chief Resident in his fourth year. His gynecological experience covers the full spectrum of women’s health care, including well woman care, treatment of menopausal issues, infertility and adolescent issues and care for both high and low risk obstetrical patients. He is experienced in laparoscopic surgery, as well as traditional gynecological surgery. Dr. Albion was named in Connelly Castle’s National List of Top Doctors. He has enjoyed being a volunteer physician at the Special Olympics.

Tim is married and the father of 2 daughters.